The Lost City of Y

Often missing from the analysis of “millennials” and their digitally native ways, is an examination of their counterparts, the analog immigrants. For the most part, the latter is predominantly responsible for the world in which the millennials were raised. They are the survivors of the 20th century; witnesses to industrial revolution, globalization, the ascent of the American economy, and the development of modern nuclear arsenals. Acknowledging such a generational divide is important in order to better understand what each side represents and how they might benefit one another. Without it, we lay the groundwork for misunderstandings that might give rise to conflict or resentment.

An immigrant is defined as someone who has come to live permanently from another country or nation in a new one. Therefore, those brave immigrants of the pre-digital world are in all likelihood here to stay. They have subscribed to a monthly smartphone and data bill. They text, email, participate in online banking, bill pay, perhaps have even tried Facetime. They record their favorite television programs or maybe just stream them wirelessly from the cloud, while asking Alexa what the weather is going to be like. As 20th century explorers traveled to the unseen worlds of Amazonia, the analog explorers of today scour Amazon, sifting through countless new species of products and possibilities. Similarly, they sometimes view the indigenous people as both nobles and savages, instinctively comparing civilizations, while the natives wonder how long they plan to stay.

Nevertheless, the cultural and technological gap that separates natives and immigrants is one that can and must be bridged. They are but relatives to one another, intergenerational kin. Too often what is missing from the millennial mindset is the salt of the earth insight of those who came before, who battled through a half-century of engineering breakthroughs in order to lay the foundation of the programmable world of today. And perhaps missing from the visitors’ perspective, is the acceptance that such a creative and programmable world in fact exists.

In such a world, traditional material possessions are often replaced by services, devices, and applications that provide a steady means of transportation on an endless river of information. The inhabitants of such a space often seem detached from a far more materially grounded world (and some of the products that go along with it), not because that world is obsolete, but simply because there is so much to explore and with every new innovation, a new door opens that becomes increasingly harder to ignore.

In the end, it takes a special type of explorer to deep dive into native territory, one not swayed by tales of cities made of gold, but who seeks to see and discover a new civilization for what it is.

This post is dedicated to the late John Perry Barlow, founder of the Electronic Frontier Foundation and early supporter for a free and open web. 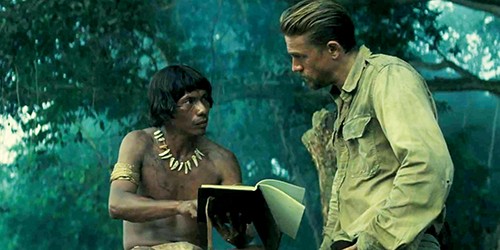